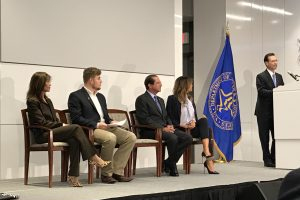 On August 20, 2018, Illumination Institute was invited to Washington DC to participate in the 6th Federal Partners in Bullying Prevention Summit. The overarching theme of the summit was cyberbullying and how to promote safe and responsible social media use.

In the introductory remarks, George Sigounas, administrator of Health Resources and Services, emphasized what a great opportunity the summit is to learn from one another, and encouraged collaboration across the different sectors represented. Amongst the invitees were representatives from youth organizations, technology and social media platforms like Google, Twitter and Facebook, education specialists, and law enforcement officials, each sharing their unique experiences and ideas on cyberbullying.

Throughout the conference, panelists discussed various policies, online safety features, and programs they had implemented to prevent cyberbullying. The social media officials, for instance, focused on how they had made their platforms a more positive and safer place by doing things such as improving their reporting features and enforcing stricter policies against abusive behavior. In addition to these very important “outside-in” prevention strategies, many also discussed the importance of looking at the behavior and emotions behind bullying and trying to make positive changes from within.

Joseph Grunwald, a student activist who had been a victim of bullying himself, shared that in working with students he found the most effective way to prevent and stop cyberbullying is to “activate student’s natural empathy response.” His remarks were echoed by another youth peer advocate who called for more social-emotional learning in schools.

Illumination Institute was invited as a panelist on the education panel to discuss how mindfulness can be used as a tool for schools looking to prevent bullying behavior. We discussed how mindfulness can play and integral role for all participants affected by bullying — the bully, the victim, and the bystander. Mindfulness enhances students’ ability to recognize and regulate their emotions, essentially working as a pause button between their initial strong emotion and how they react to it. Students who bully others often have poor impulse control, so strengthening this ability is a key component of prevention. Additionally, mindfulness promotes self-acceptance and self-compassion, which is beneficial both to the bully and the victim of bullying. The victim can further benefit from mindfulness as they focus on the present moment and learn to let go of thoughts and emotions that bring them down. Finally, we know that the bystander plays a crucial role in stopping bullying, but it takes a lot of courage to intervene. Practicing mindfulness, especially together as a class, fosters a sense of unity and a safe space, which encourages both empathy and compassion in the bystander.

There is no simple or easy solution to bullying prevention but adding mindfulness to other forms of interventions seems to be a very easy, affordable and low-risk approach with many benefits.

We enjoyed attending the summit and continue to look for opportunities to collaborate and learn from experts in the field. If you have any experiences or insight in dealing with bullying and/or cyberbullying you would like to share, please reach out to us. We love hearing from you and always welcome new ways to promote kindness. 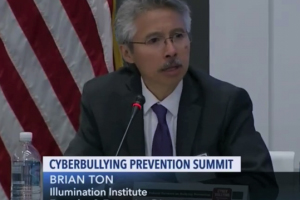 About the Author: Hiromi Hiraoka